Surviving the Lockdown by Paul Thornton

Guest writer and LONAP community member Paul Thornton talks about how he set up a new fibre to the home ISP during the COVID-19 lockdown.

It was clear that lockdown was imminent. Sufficiently so that I quickly brought forward some maintenance and thus found myself slightly bleary-eyed in Telehouse at 8am on the Sunday morning before “Lockdown Monday”, manhandling some recalcitrant routers and sorting out why the last-resort OOB management access wasn’t working. The only upside to this unscheduled disruption to my weekend was a distinct lack of traffic en-route and an unexpectedly hassle-free datacentre trip - which probably should have made me realise that I would be required, at the least convenient moment, to pay penance to the Gods of networking at some point in the near future.

At the beginning of March, I had just started working with Lightning Fibre (not yet a LONAP member - give me time), who are a new FTTP network provider down on the South coast in Eastbourne [Ed: Lightning Fibre has since joined LONAP]. I was particularly pleased with this as customer finds go, as more often than not, prospective customers appear at the other end of the country - or in a different country - so having one almost on the doorstep; merely a pleasant half-hour drive away was certainly a win. The only slight downside to the deal was that I’d agreed that we should, hopefully, be able to get their first customers connected and working by April. 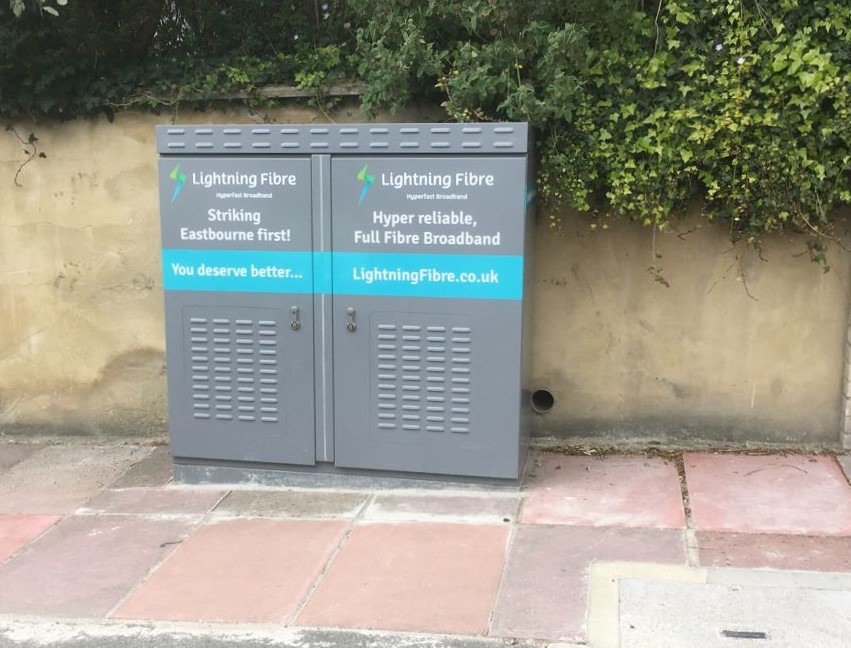 In the interests of clarity, I would like point out that they had their launch street cabinet installed with power, BT had visited and deposited some 10G circuits which turned up in Telehouse, and they were busily digging up the leafy avenues of Eastbourne. Kit was expected from both Adtran and Juniper, but hadn’t arrived yet, and the rack space they were meant to be using in Telehouse was taking ages to actually secure. They did have the foresight to become an LIR in 2019 before that particular well ran dry, but other key networking parts were lacking… those that I’d enthusiastically agreed to put in place on a somewhat demanding timescale. A timescale which did not anticipate global commerce coming to a shuddering halt a fortnight later.

As March progressed and worrying COVID-19 statistics started emerging, things were not going particularly well on our delivery front either. We finally installed some routers in hastily re-arranged rack space the week before lockdown was imposed, but lacked transit due to a large provider being somewhat slow with actually delivering service (you’d think that asking them to deliver to a rack in a major datacentre - where they have a PoP - was a novel and complex proposition). A swift temporary connection to the PRT network later meant that not only did we have IP transit available, I could also connect my lab in Sussex at L2 to the core in London to continue testing. Things were looking up.

April started with a distinct grey cloud threatening my previous optimism: A carrier who shall remain nameless hadn’t yet handed over our link from Eastbourne to Telehouse, mainly because they hadn’t arranged for anyone to plug in our cross-connect at their end. As they rapidly reconfigured their delivery teams to prioritise emergency services and other critical infrastructure, we were worried that the one thing we absolutely couldn’t work around might not get connected in time. Ordering FTTC to the cabinet would not have gone down well as a temporary fix, however amusing a concept that may have been. Some gentle badgering, and agreeing to help them test end to end later, the circuit was finally complete and handed over. Not before we discovered that Openreach hadn’t actually delivered what was ordered, necessitating a return trip to resolve.

As March progressed and worrying COVID-19 statistics started emerging, things were not going particularly well on our delivery front either.

Adtran kept promising that our shipment of equipment would be on the next flight, but it seems that our pallet of kit always managed turn up at the boarding gate after they’d shut the cargo doors. Eventually this too arrived, and was personally delivered to me by the managing director of the distributor in question - they’d furloughed a large swathe of their staff and the senior management team were hard at work filling the roles. I didn’t have time to contemplate isolation - trying to keep these assorted plates spinning was taking most of my time, but I did allow myself a wry smile when I realised it was a good job that all my colleagues were working from home, as I’d pretty much filled any remaining spare space in the office up with boxes as a result of the delivery. Half of them are still there: Note to self, tidy office before everyone comes back.

As luck would have it, the week before I was scheduled to install and commission the OLT (the active cabinet equipment that actually terminates the fibres going to customer premises), we had some unseasonably warm weather. This was good for a number of reasons, not least because I needed to perform some high-temperature testing of routers and said OLT. When you’re in full lockdown and unable to use the more conventional options, improvisation comes to the fore: We tested environmental tolerances in a specialised environmental performance evaluation facility - known also as “the greenhouse”. Boy are those devices loud when the fans spin up to full speed, but everything continued working as expected with no reported errors despite temperatures pushing 55°C. “Bespoke environmental testing” section will shortly be added to the company website.

The weather decided to taunt me by turning from delightful sun to wind and rain almost overnight, and this helpfully coincided with our planned installation in the street cabinet. I don’t want to sound like a lightweight, fair-weather network engineer but the idea of installing active kit in a street cabinet whilst being assisted by a gale with accompanying horizontal rain really didn’t appeal, and I was thus delighted when that plan was abandoned for another day. Off I went a few days later, van loaded with kit, towards clear blue sky and sunny Eastbourne. I had heard that Sussex police were turning people destined for the beach back; clearly, I didn’t look the part at all and was totally ignored by the boys in blue.

In the interests of science, I can report that social distancing between two people attempting to install an 8U bit of kit in a roadside cabinet is best classed as “limited”. We actually did quite well keeping one to each side and I’ll leave it to you to consider how awkward it is trying to do rack installs at arm’s length. After several hours of fun with the odd minor snag, we were complete and there was much rejoicing when pings were seen to not only go out to the Internet at large - but to come back as well. The only slight downside was that the only LC patch leads I had to hand were 5m ones, which could best be described as “excessive” to travel 2U.

Since that installation, we have been connecting up our first customers, who found a 1G connection a bit of a shock after the lacklustre 20M they were used to; and working on automating more of the delivery process. We also dealt with the rather long patch leads. I was amused to note that underneath a particularly shiny network management installation - we all know the sort, the large Java-based monoliths where the supplier promises it does everything, but on closer inspection it barely manages to start up - it ended up interacting with the underlying network hardware using expect on the CLI. Nothing seems to have changed in that regard for two decades!

Since that installation, we have been connecting up our first customers, who found a 1G connection a bit of a shock after the lacklustre 20M they were used to.

So how did I survive the lockdown? By getting a new ISP out of the door. It was certainly more challenging than it could have been, and we were a couple of months later than planned connecting up customer No. 1 - but in the circumstances I’m very happy with the outcome. Now the real fun begins - growing the network. But that will be a tale for a different day.

Paul Thornton is senior consultant at LONAP Member PRT Systems, and a pioneer Internet engineer particularly in the UK peering community. He has been involved in some high-profile academic networks, as well as government projects at local, national and international levels.