The LONAP 2018 AGM was held on Thursday 6th December 2018 at the IET in Savoy Place. The agenda of the meeting is fairly standard:

Richard Irving Review of the year

During 2018 we saw 21 new members and 6 departures leaving a net gain of 15 in the year. The typical reasons for members to leave are either because of a merger with another member or simply the company ceasing to exist. The total connected capacity at the end of 2018 was 3.21 Tbps with a maximum traffic level of 409Gbps. Turnover at £905k is 20% up on 2017 and despite seeing port price reductions in the year. 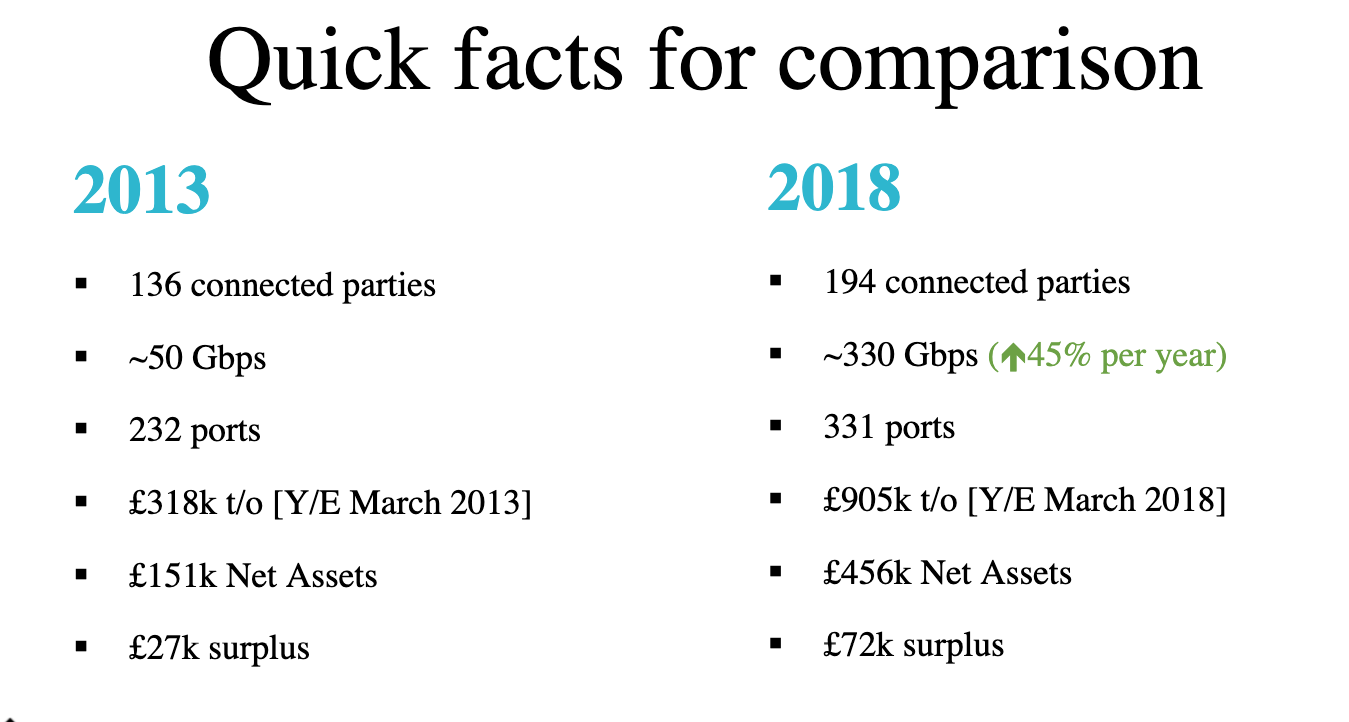 Will Hargrave on Port Upgrades at LONAP

Will discussed the rationale for offering partial ports to make it easier for members to expand their capacity.

Is port upgrading a problem? After all isn’t this what IXPs do? Yes of course it is. Every week we get a report on traffic density at each of our ports and our intention is to contact members who are congesting. 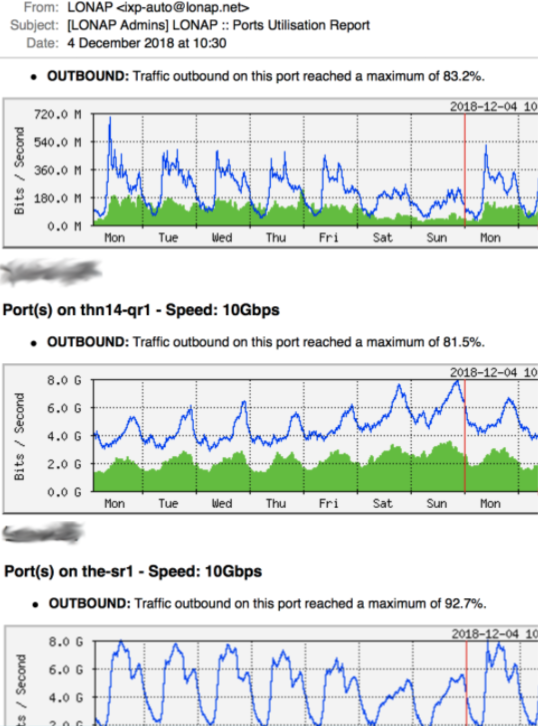 What happens then? Here are some normal responses:

We looked at the average cost per Gbps for different capacity ports. This is not a particularly easy thing to do considering the wide variation in cross-connect charges and router port costs but we came up with the numbers shown in the table below. Note the (obvious really) significant drop when you move from a 1Gig bearer to 10Gig. 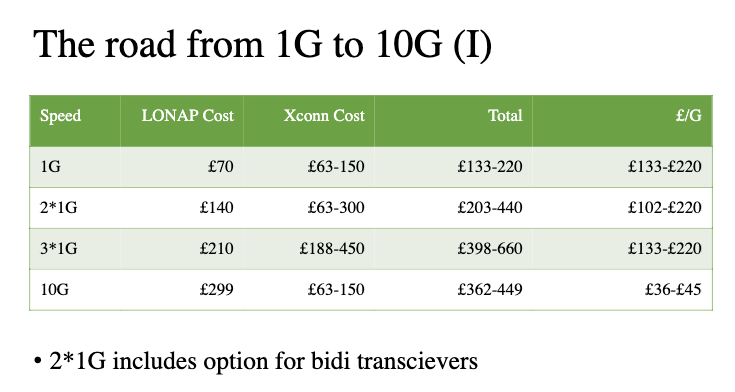 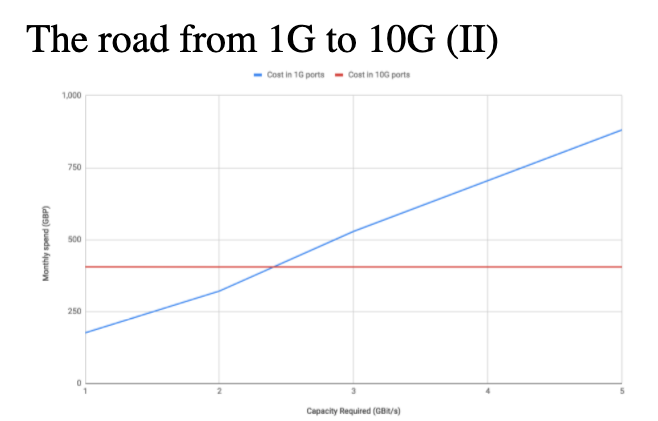 The threshold where 10Gbps gets cheaper lies between 2Gbps and 3Gbps.

The model is similar when considering a move from 10G to 100G although the break points are slightly further up the bandwidth usage curve (if that’s the right way of putting it). 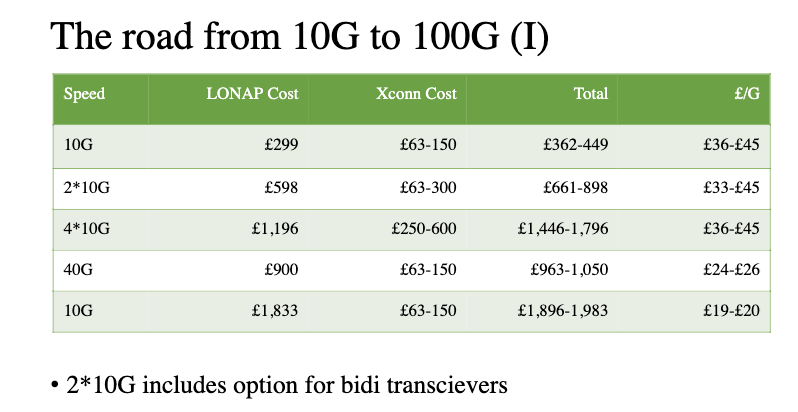 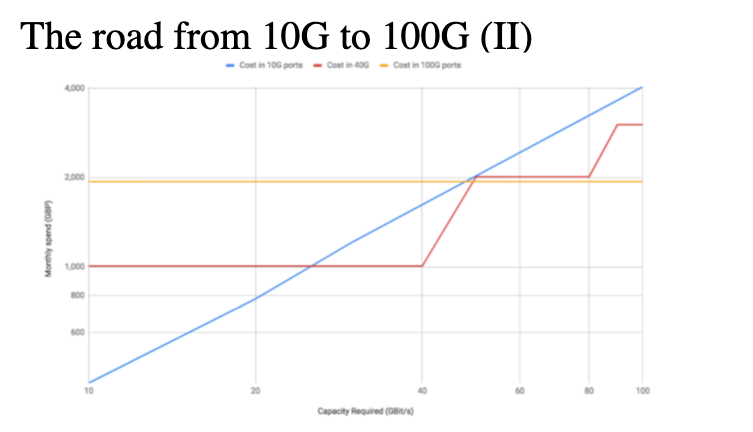 Now it is worth considering the LONAP facts of life in 2018.

Pricing “pain points” may discourage timely upgrades and most upgrades require a site visit from both LONAP and the member. This brings operational difficulties with the need to schedule availability of all the stakeholders (i.e. LONAP eng and member eng).

The result of this is that we have decided to make the following partial ports offering available.

Ports will be rate-limited on egress and (generously) shaped on ingress. You should apply your own QoS. Upgrades are now possible at any time via support ticket as no site visit is required. You can upgrade physical media now but keep lower opex costs, avoid future site visits to upgrade and reduce cross connect spend. What’s not to like? :)

Rob covered his usual subjects of ticketing performance, connection activity, work done on the route servers including the state of play with IPv6 prefixes. 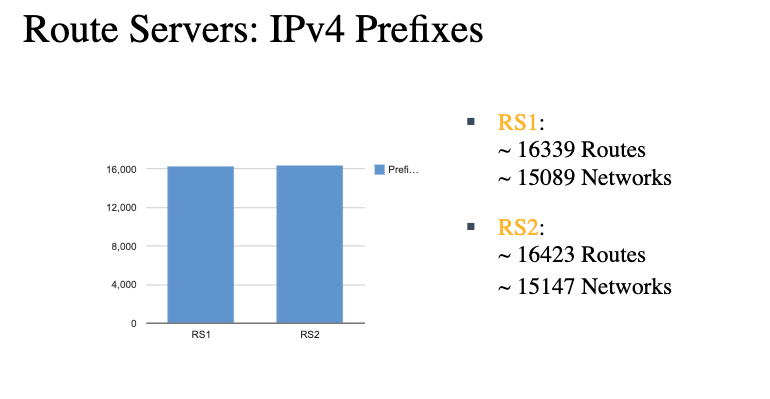 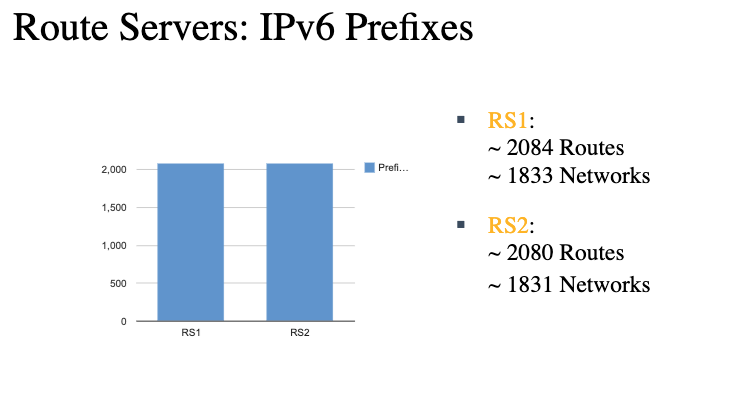 A number of minor network incidents were discussed. These were sorted by migrating away from the last remaining Extreme switches in HEX and the replacement of some optics on the Equinix LD6 - LD8 link.

Rob also discussed the work he had done on GDPR. In short we have a new privacy statement: https://www.lonap.net/privacy-statement

There is also a new opt-out form for existing IXP Manager contacts ensuring we are respecting the opt-outs and privacy. We have also contacted some individuals who have their details down as NOC/Peering contact.

Jody spoke about the training sessions we had conducted during the year. Why do we offer workshops/training?

In the first instance it helps members gain/improve technical knowledge. Having more technically proficient members benefits all members. This also potentially reduces support burden and increases engagement with LONAP and the community.

Training has taken the form of both workshops and more formal training sessions. BGP is the obvious topic to teach given we’re an IXP. Workshops have covered other technology e.g. automation. Partner support has been good and we have had sessions delivered by Arista, Xantaro, Cloudfare and Prolexic. Gamma & Equinix have provided facilities for/hosted events.

Tref has also delivered some VoIP related workshops. These were not LONAP events but our members were invited and they were very well attended.

We are planning to run more workshops during the coming year.

The AGM was kicked off at 16:00 by Tref and Pete Taphouse.

Two resolutions were put before the membership:

Resolution 01 To receive the minutes of the 2017 Annual General Meeting - Passed unopposed.

Peter Taphouse presented income vs expenditure and the balance sheet for the financial year end 31 March 2018. He noted that there was again an increase in revenue of £157k on the previous year due to 10 GE and 100 GE port subscriptions and this resulted in a £72k surplus which was being held for infrastructure replacement in the future. Peter Taphouse explained to the meeting that LONAP had amended its treatment of VAT for members domiciled outside the EU and would be taking full advantage of our Mutual Trading status during the next Financial Year to reduce the Corporation Tax liability.

Resolution 02 To receive, and adopt the Report of the Directors, Accounts and Balance Sheet for the year ended 31 March 2018 - Passed unopposed

There being two nominations and one vacancy for a LONAP Director, an election was held. The candidates each gave a brief presentation in support of their appointment and the members present were given the opportunity to ask questions.

A vote took place and the meeting was adjourned to allow for refreshments and the counting of votes. Bijal Sanghani from Euro-IX kindly acted as the returning officer and counted the votes.

33 votes were cast either by electronic voting, Proxy or in the room. Two were spoilt which resulted in 31 votes cast. Martin Levy polled the most votes and was thus declared to be the elected Director to the LONAP Board.

This concluded the formal part of the AGM and Trefor Davies closed the AGM meeting at 16:46.

Bijal Sanghani gave a short presentation about the work of Euro-IX and some tools that are in development.

There being no further business the meeting was closed by Richard Irving at 17:00