The LONAP AGM for the financial year ending March 2021 was held by online video conference on 2nd February 2022.

There was one vacancy on the LONAP Board. Elected director Martin Levy stood down by rotation.

As the AGM was to be held early in February, this necessitated the call for candidates to run over the 2021 winter holiday period. We therefore called for candidate nominations with an extended timeline, allowing a full three weeks for candidates to be proposed and indicate their readiness to stand for election, followed by 23 days for proxy registration in advance of the AGM itself.

The agenda was adapted to accommodate the online environment; the formal AGM was held first, as the AGM must start within 30 minutes of the advertised time.

The formal minutes of the meeting will be circulated to LONAP members and voted on for approval at the next AGM.

The AGM and voting was conducted fully online: recordings and slides are available to members in the member document store.

Richard Irving discussed the company’s revenue over the past five years and talked about how offering members the option to pay via direct debit from UK bank accounts helped to reduce the administration for LONAP. 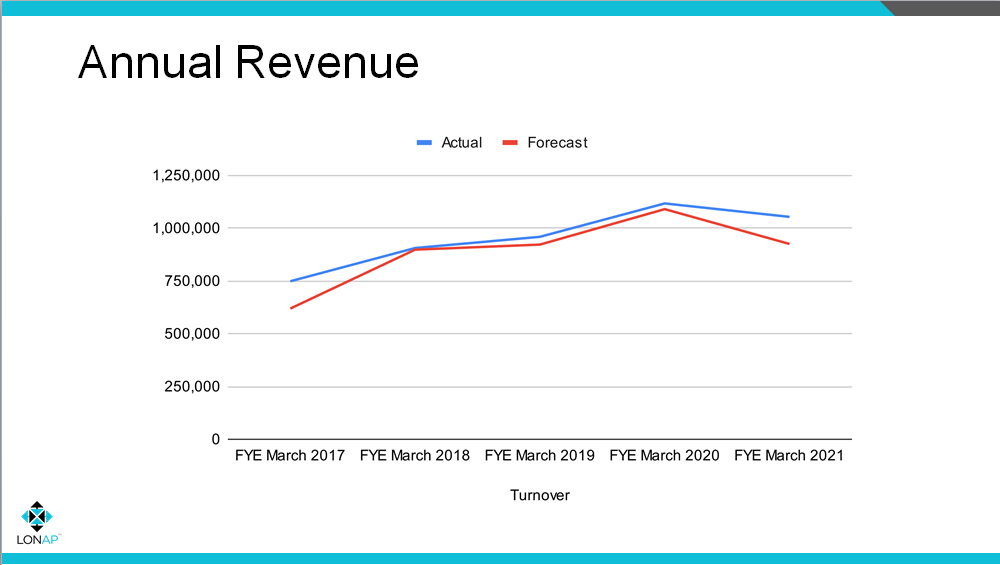 He also presented data on the number of ASNs joining versus leaving the exchange, the port load-out by revenue and location and finally a slide on how the surplus that LONAP holds has been accumulating. He noted that the company holds about £250k of surplus as working capital. 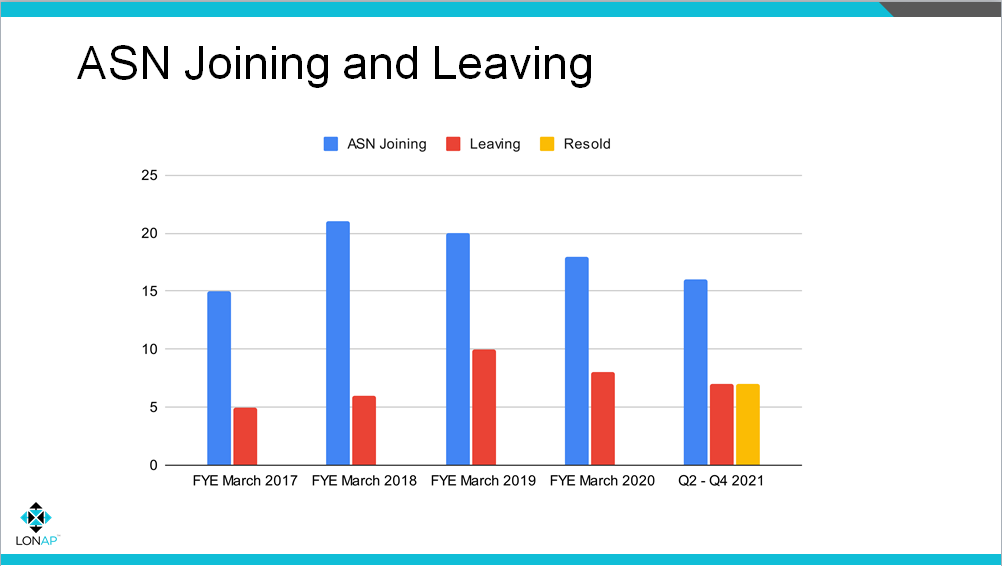 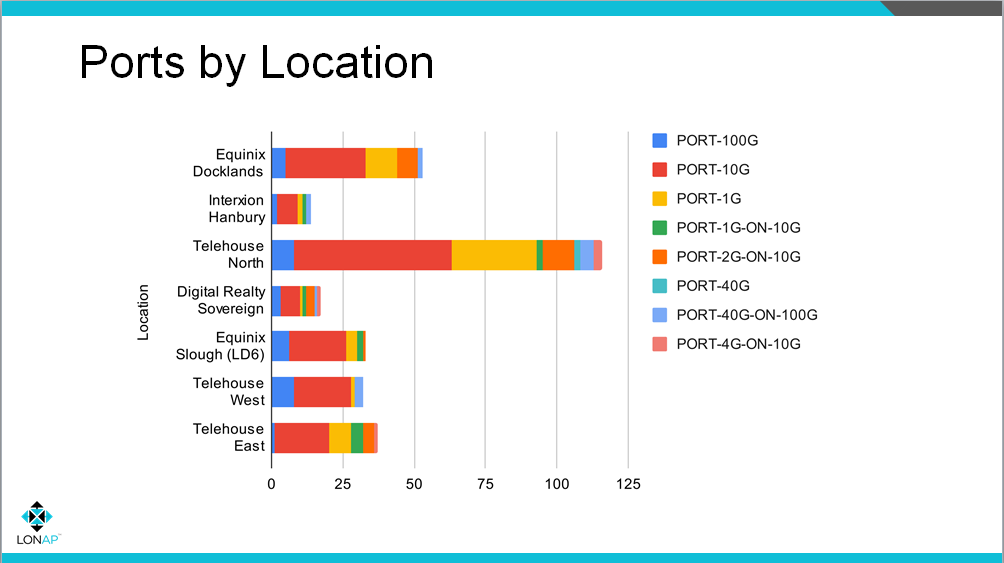 Richard talked briefly about LONAP’s reseller programme and invited any member to get in touch if they are interested.

Will Hargrave presented an overview of the hardware and topology in use on the exchange, the deployment of 400G in the network, together with the regular use of BCP214 at LONAP. 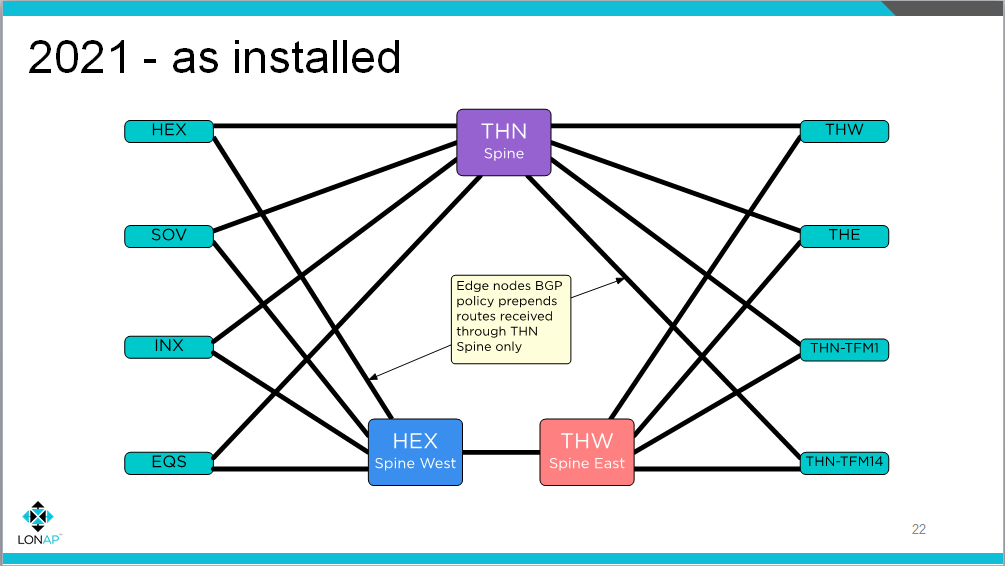 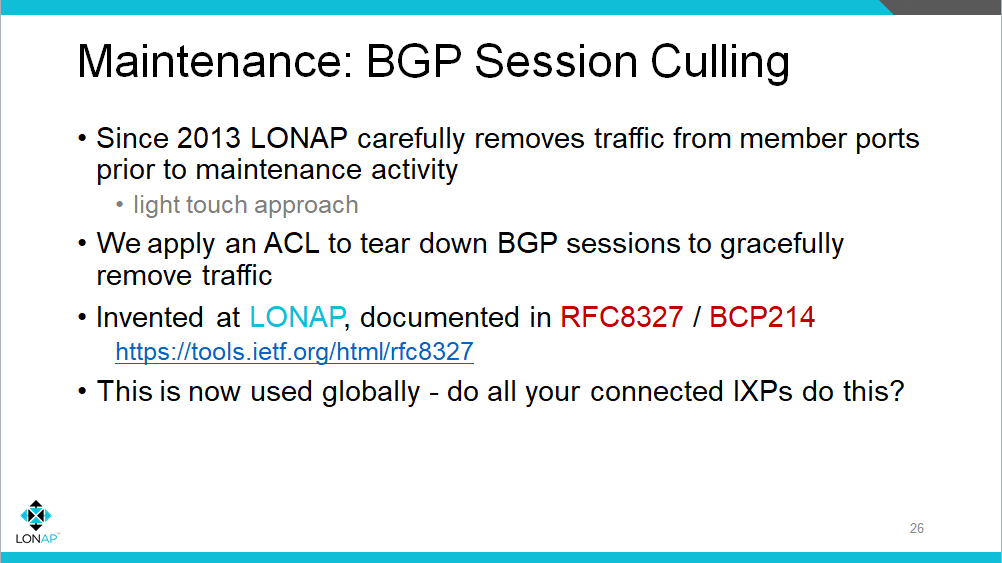 He then discussed the rationale for partial or “Sub-rate” ports that LONAP first introduced in 2018 and is adding to this year with a partial 20G-on-100GE Peering product. Details. 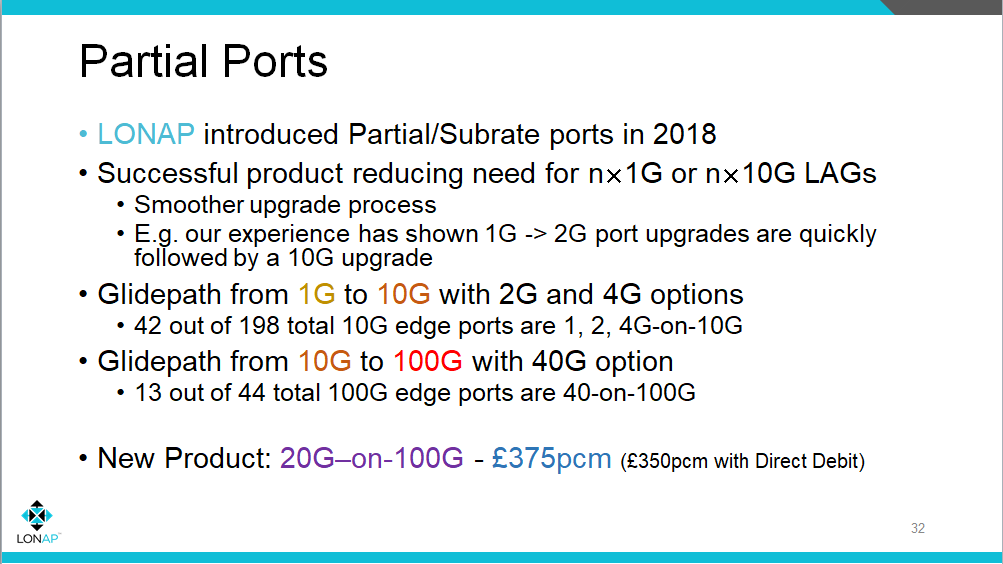 The third presentation was from Ian Chilton, who has been working on several concurrent automation projects as well as being involved in the operation of the exchange. Ian gave an update on work already completed during the past year including monitoring, automation and redeployments of virtual machine hosts. He then presented on a plan to implement new firewalls before the end of March. 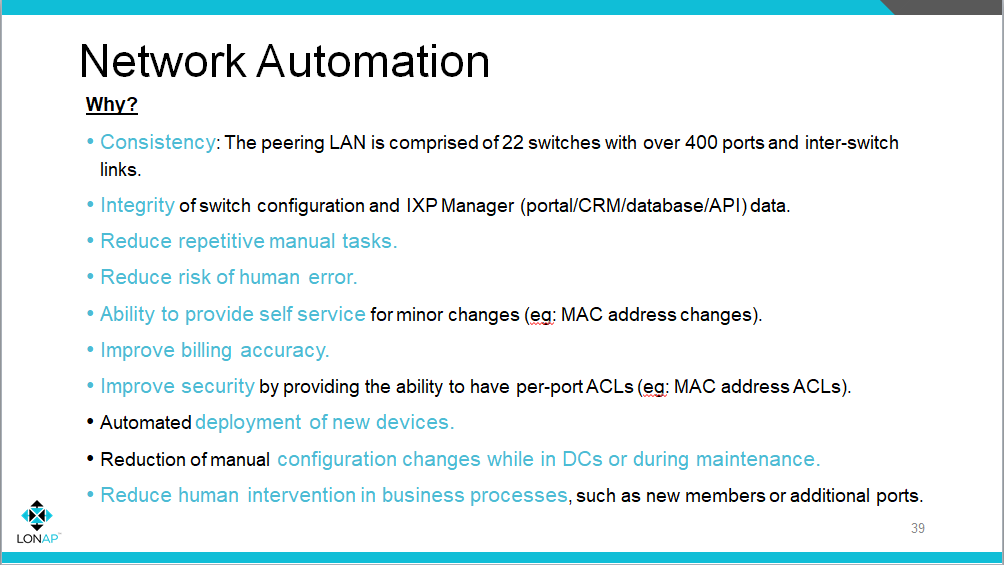 The last presentation of the meeting was from Rob Lister. Rob manages provisioning and first line response for LONAP, he presented some detail on the number of tickets raised and response times. 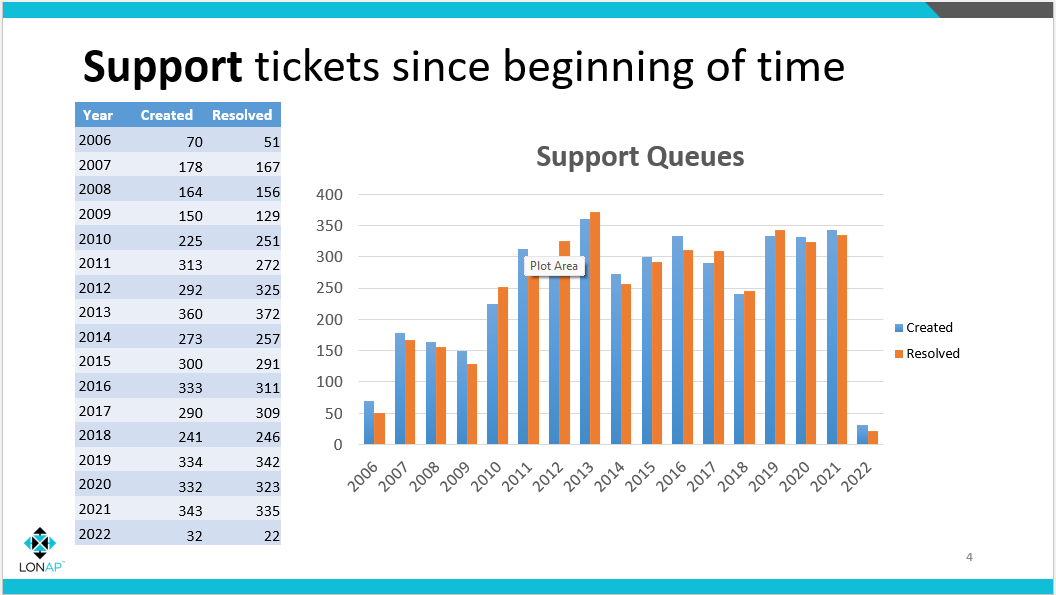 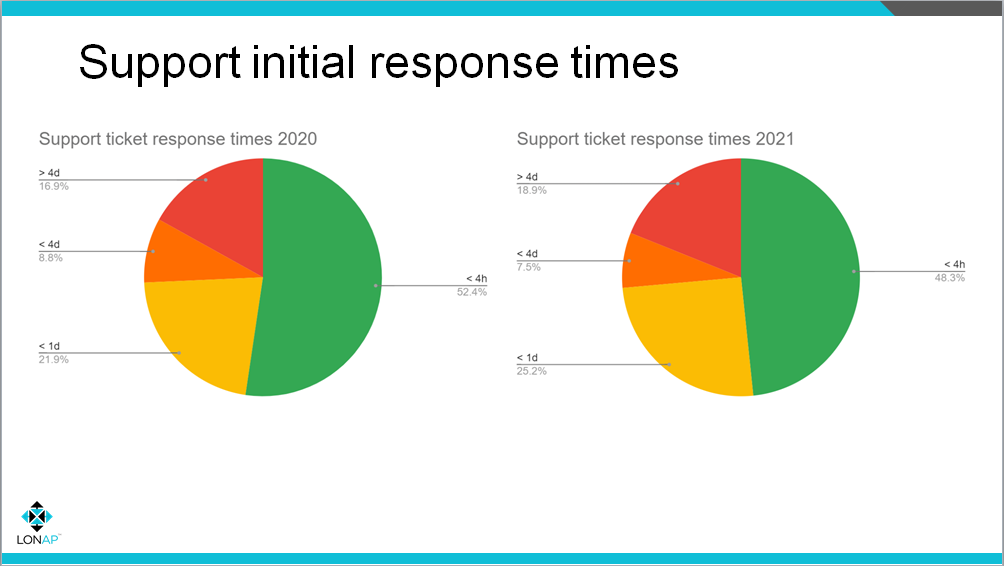 He then discussed route server usage at LONAP and noted the high participation level for both IPV4 and IPV6, as well as the good engagement rate of members for RPKI validation. 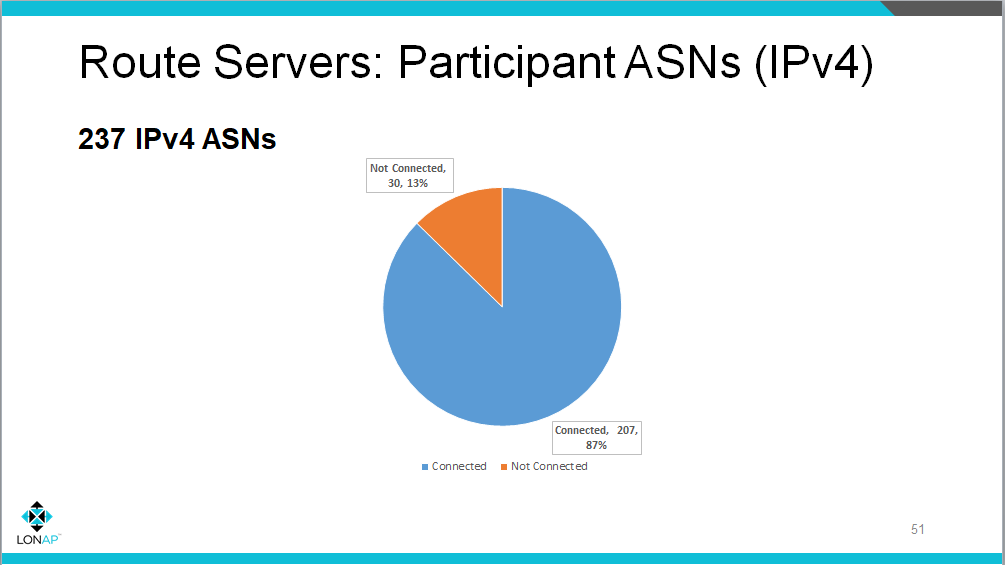 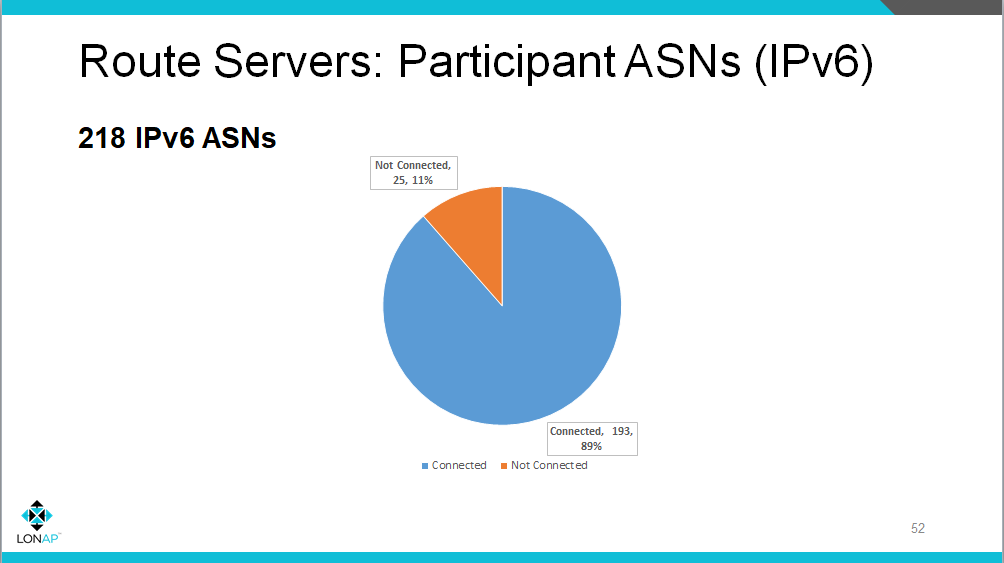 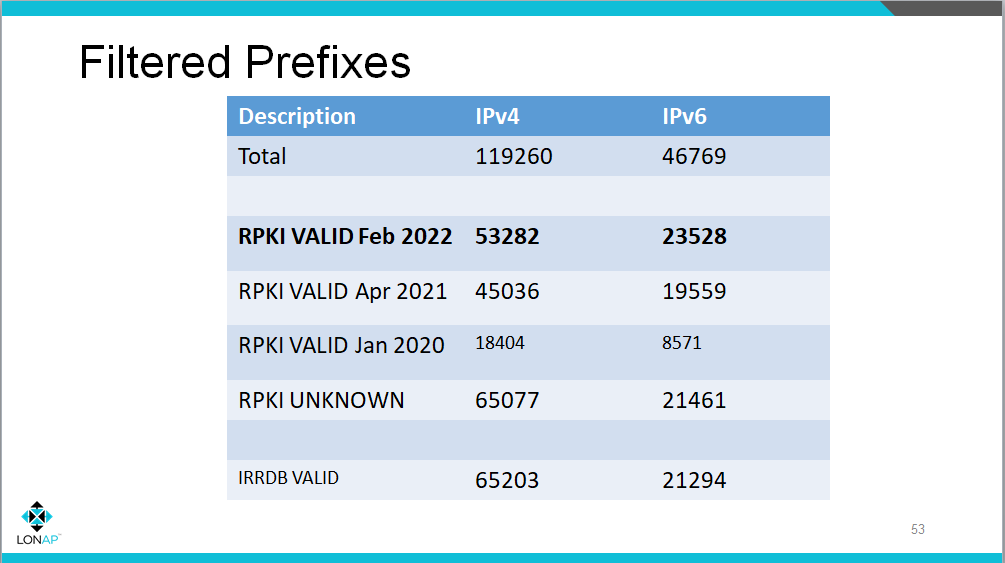 Rob then touched upon LONAP’s change of online voting systems and our experience using both BigPulse and OpaVote to process and count the votes. We much prefer OpaVote’s simplicity and cost. Rob has developed tools to integrate our systems with OpaVote, and automate election and voter management.

Finally Rob talked about the slow death of Mailman 2 and our deployment of Sympa as a better replacement. Sympa is also integrated with the contacts database in the Member portal, rather than requiring manual updates.