This was the first time we ran an AGM with an extended timeline (as approved in the earlier 2021 EGM), allowing a full two weeks for candidates to be proposed and indicate their readiness to stand for election, followed by three weeks for proxy voting in advance of the AGM itself.

This meeting was run in a different order to previous meetings to accommodate the on-line environment; the Formal AGM was held first as the AGM meeting has to start within 30 minutes of the advertised time. Just before the start, we identified a potential issue with the on-line voting engine and decided to extend the voting for seven days to allow everyone enough time to vote, so the formal AGM was resumed on 28th April to present the results.

The formal minutes of the meeting will be circulated to LONAP members and voted on for approval at the next AGM.

The AGM was held fully online and the recordings and slides are available to members in the member portal - please login if the page appears blank.

Richard Irving discussed some improvements to workflow and the monitoring of exchange services, as well as the work to automate to improve efficiency in the way in which the company delivers service. He also presented data on the number of ASNs joining versus leaving the exchange during the past seven years and how this has increased the companies annual turnover despite price cuts. 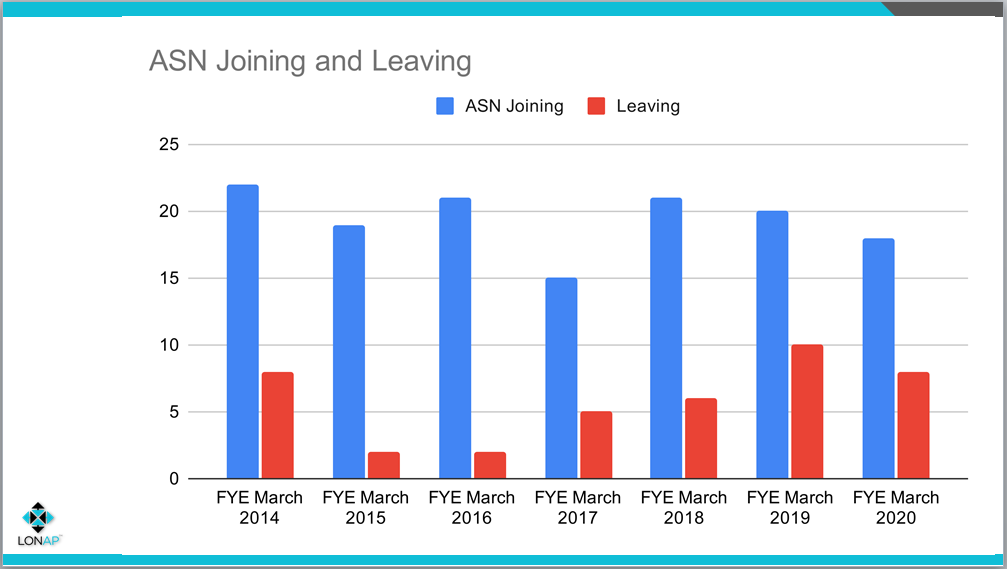 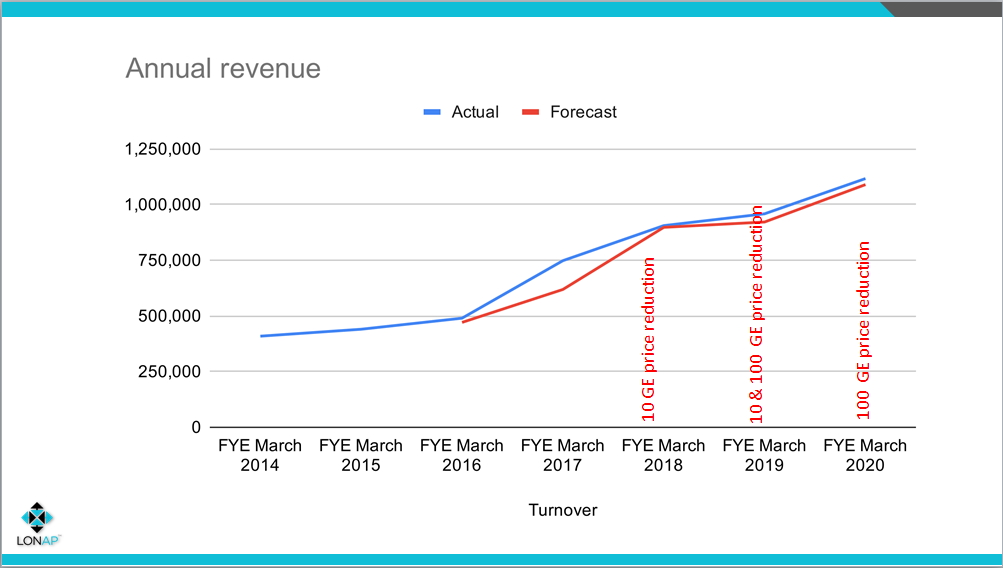 Will Hargrave then presented a summary of data on sustained traffic growth in the past year and a large traffic event that LONAP experienced in March 2021, which resulted in a peak of 773 G/bps for several hours on the exchange. 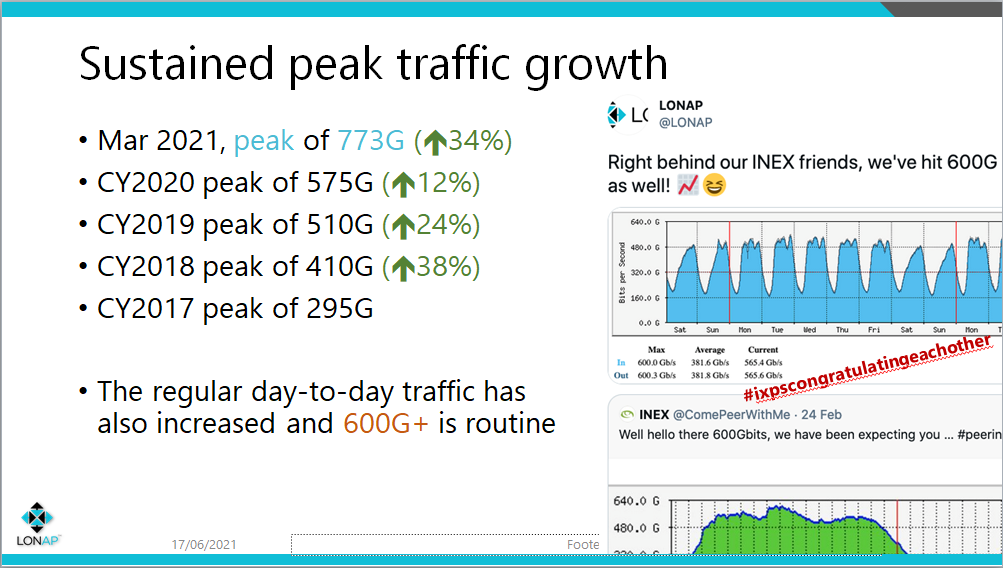 He then discussed some engineering developments both in exchange architecture and hardware deployment, noting that vendor pricing had moved significantly in 2020 and this has caused a re-design of LONAP’s infrastructure to better use our investment budget.

The third presentation was from Ian Chilton, who has been working on several concurrent automation projects as well as being involved in the operation of the exchange. He has been working on the re-depoloyment of the systems that support the running of the exchange. Ian also presented an update on the LONAP network monitoring project using Sensu at NLNOG Live!, which was reported in this post and recorded on YouTube.

The last presentation of the meeting was from Rob Lister. Rob elaborated on the workflow improvements and presented data on ticket response and how this has been improved. He then went on to discuss route server participation by LONAP members and noted the similarities between IPv4 and IPv6 participation across the membership. 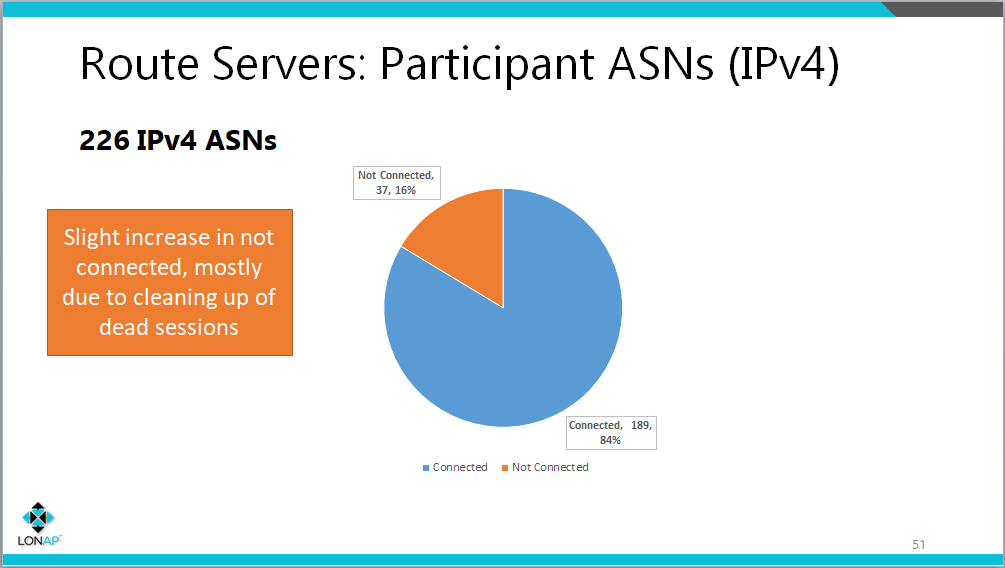 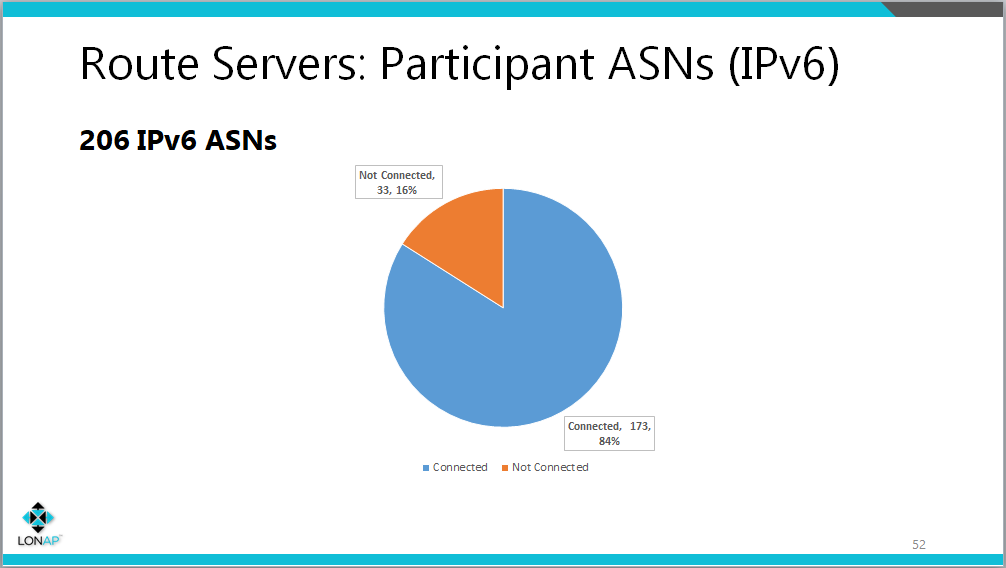 Rob then presented an update on the network outages experienced since the last AGM in January 2019, two of which were service-affecting for a minority of members and the third which reduced redundancy but did not impact service.

The last part of Rob’s presentation focused on how we have managed the impact of COVID-19 so that it has not affected LONAPs operations.

Posted 26 May 2021 by Richard Irving under Annual General Meeting and Events.